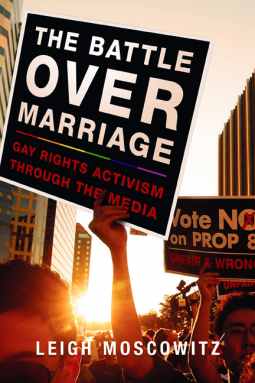 Disclaimer: I received this book free from NetGalley in exchange for an honest review. I did not receive any form of compensation.

Anyone who has been following politics and social reform issues for the past decade is aware of the ongoing fight to legalize same sex marriages.  Not only in the US, but in other countries as well.  One of the biggest proponents for allowing this tidal wave of change is the media.  And not just mainstream media either.  Social media plays an important part as well.

This book focuses on how the media has played an active role in allowing people’s views to come forward about same sex marriage and to help gas up the engines of change.  But this book is so much more then that.  It also showcases the Gay Rights movement from the very beginnings.

Some of the pieces that are portrayed in it are heart wrenching.  While others are heart warming.   If you ever wanted to read a history of the Gay Rights movement and how media played a role in its progress, then I highly suggest picking up this book.  It will definitely be enlightening.

Any book bought through the Amazon link below will have a portion of the sale go towards the Unitarian Fellowship of South Florida.