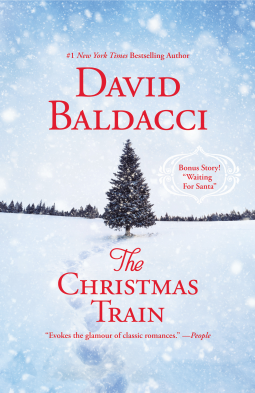 The Christmas Train by David Baldacci
My rating: 5 of 5 stars

Disclaimer: I received this book free from NetGalley in exchange for an honest review. I did not receive any form of compensation.

There has always been a sense of nostalgia about trains. Thoughts of trains bring you back to days gone by, when times were simpler. Life may not have been easy back in the days when trains were the main form of mass transportation. But people had a sense of who they were, they knew what they wanted out of life, and most importantly, they took time out to savor what they did have.

My own family’s history with trains is a long lived one. I have traced back a few generations on my mom’s side that were all railway men. I personally have not had the chance to ride the rails. However, after I read this story, wanderlust has set in. Unfortunately, I have no where to go, no money to travel, and no one to travel with. So I will have to content myself with traveling through my imagination.

The Christmas Train by David Baldacci takes the reader on a train trip from Washington, D.C. to Los Angeles, California. The main character, Tom Langdon, sets off on a trip across country in hopes of finding his true self and finding where he wants to go with his life.

In the past, Tom was constantly looking for the next rush of exhilaration, the next heart pumping action packed adventure, the next breath taking moment of near death experience. A few times, Tom had wanted to pop the question to his longtime girlfriend, Eleanor. However, he was more fearful of asking for her hand in marriage then being taken hostage in a war torn country.

It wasn’t until Ellie walked out on Tom that he really had to reevaluate his life. The loss of Ellie left him cold and bereft. Being a war correspondent no longer held its thrill. He soon traveled back to the states and sold his sold to mass publications in the form of writing fluff pieces on the latest furnishing crazes.

Tom drifted from one relationship to another. He finally settled for an unfulfilling long-distance relationship with Lelia. He was most happy when they were on opposite sides of the country. This Christmas, he was supposed to travel to meet up with Lelia in LA so that they could spend Christmas together in Tahoe.

Little did Tom know that boarding the train in D.C. would be the most exciting and awe-inspiring trip of his life time.

This book really was an eye opener. It reminds you that you never know what life may bring, so you must live it to its fullest. Don’t let things slip away from you. If you are lucky, the first time around, hold on to it. If you get a second chance, don’t let it slip through your fingers.

There was a lot of train history and lore woven into this book. Interestingly enough, I had to read most of this book by candlelight since we were without power for many hours. I think that may have also lent itself to the nostalgic feel.

Definitely a great book that no one should pass by!

Any book bought through the Amazon link below will have a portion of the sale go towards the Unitarian Fellowship of South Florida.

View all my reviews