Posted by wakela on September 11, 2013
Posted in: books, netgalley, review. Leave a comment 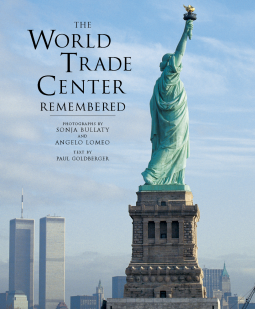 Disclaimer:  I received this book free from Abbeville Press in exchange for an honest review.  I did not receive any form of compensation.

There are a few times throughout history that people will always remember exactly where they were when they heard the news.  9/11 was definitely one of those occasions.  I remember being at work in the doctor office that I was working for at the time.  Our switchboard operator was out sick that day.  So one of our appointment schedulers, Jimmy, was working on the switchboard.  The phones weren’t busy yet since our day was just basically starting.  Jimmy was on the phone with his wife.  He looked over at me and told me that his wife just said that a plane hit one of the towers.  Shortly after he completely paled as he told me that his wife said that the other tower had been hit by another plane.

At that point, everyone in the office made a mad dash to one of the doctor’s offices.  This doctor had a TV in his office and we all huddle around it to find out what was going on.  One of my coworkers was in tears because her brother was supposed to be in the WTC that very morning making some deliveries.  Of course, she couldn’t reach him on the phone.  So her panic started rising.

Most people that I know have some similar story of how they remember that day.  My niece was woken up by her boyfriend who came by to visit.  At first, she thought that he had stopped in to say Happy Birthday.  In fact, he had been on his way to work and heard on the radio.  He stopped in so he could see her TV.  That was definitely not the birthday greeting that she expected.

No matter where you were that day, the images that were repeatedly shown over and over are forever etched in our memories.

This book attempts to replace those horrifying images with ones of the WTC at a more peaceful time.  The photos in this book show the WTC at all hours of the day and from all view points.  It is truly a thing of beauty.