Alvin and the Chipmunks: Chipwrecked for the Wii

Alvin and the Chipmunks: Chipwrecked is a Rhythm-Music game inspired by the 2011 major motion picture of the same name. The game features six customizable chipmunk characters from the Alvin and the Chipmunks franchise and 30 songs that players dance to either alone or in 2-player co-op. Additional features include: easy-to-follow on-screen dance directions, 50 different dance moves, finishing dance moves, six in-game tropical locations, immediate in-game feedback on performances, motion recognition for dancing through the Wii Remote and more.

Dance Along to the Chipmunks

Dance and sing along with Alvin and the Chipmunks in this motion-based experience for Wii that lets you perform for the crowd as one of your favorite singing Chipmunks or sassy Chipettes. Dance to classic Chipmunk hits as you play in environments right from the big screen. Players can also unleash your ‘Munk Power’ to perform ultra-cool finishing dance moves. Get the party started in the exciting musical adventure that is Alvin and the Chipmunks: Chipwrecked. 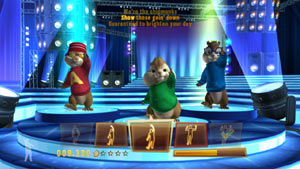 Rhythm-Music based fun with Alvin and the Chipmunks inspired by their 2011 film.

This was tons of fun to play!  I grew up watching Alvin and the Chipmunks.  I remember as a kid I would dance along with the cartoon when they were singing.

And this game, allows you to do just that.  They show you which moves to use.  They even play the words on the screen so you can sing along with the Chipmunks.

You can even play in story mode.  This allows you to follow along the movie and unlock songs as you go.

So if you love good music, if you love to dance, and if you especially love the Chipmunks, then hurry up and get this game!

In conjunction with the Wakela’s World Disclosure Statement, I received a product in order to enable my review. No other compensation has been received. My statements are an honest account of my experience with the brand. The opinions stated here are mine alone.