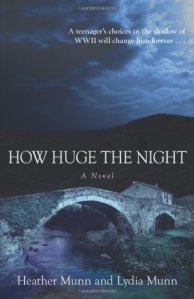 When had God ever stopped a war because a teenager asked him to?

For fifteen-year-old Julien Losier, life will never be the same. His family has relocated to southern France to outrun Hitler’s menace. But Julien doesn’t want to run. He doesn’t want to huddle around the radio at night, waiting to hear news through buzzing static. Julien doesn’t want to wait.
Angry, frustrated, and itching to do something, Julien finds a battle everywhere he turns.
Soon after his family opens their house to a Jewish boy needing refuge, Julien meets Nina, a young Austrian who has fled her home by her father’s dying command. Nina’s situation is grave and Julien suddenly realizes the enormity of having someone’s life or death depend on… him.

Thrown together by a conflict that’s too big for them to understand, these young lives struggle to know what to do, even if it is not enough. Is there a greater purpose in the shadows of this terrible war? Or will their choices put them in greater danger?

“The Munns have written an engrossing historical novel that is faithful to the actual events of World War II in western Europe during the tumultuous year 1940. But How Huge the Night is more than good history; it is particularly refreshing because the reader sees the conflict through the lives of teenagers who are forced to grapple with their honest questions about the existence and goodness of God in the midst of community, family, and ethnic tensions in war-ravaged France.”—Lyle W. Dorsett, Billy Graham Professor of Evangelism, Beeson Divinity School, Samford University

“Seldom have the horrors of war upon adolescents—or the heroism of which they are capable—been so clearly portrayed. I loved this coming-of-age story.”—Patricia Sprinkle, author of Hold Up the Sky

“The book expertly weaves together the lives of its characters at a frightening moment in conflicted times. As we read of their moral dilemmas and of their choices, we too wonder, Would I do has these in the story have done?”—Karen Mains, Director, Hungry Souls

This was an emotionally powerful story as we follow the lives of two families that were torn apart due to Hitler’s advances during World War 2.

I really loved the historical facts that they threw into the story.  This helped to bring this horrific war to life for me.  I had never been interested in wars before.  However, while I working on my family tree, we found that one of my mom’s cousins was listed as MIA during WW2.  We have ordered his military records and I can’t wait to go through them.

In conjunction with the Wakela’s World Disclosure Statement, I received a product in order to enable my review. No other compensation has been received. My statements are an honest account of my experience with the brand. The opinions stated here are mine alone.